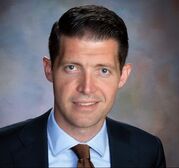 ​Congratulations
Andrew Brady '02
Mr. Andrew Brady was selected as the President of West Catholic Preparatory High School (WCPHS) on Monday, April 12, 2021.  Last May, we shared the appointment of Mr. Brady, as Interim President while a national search continued for the appointment of President.  At the conclusion of that search process, it was clear Mr. Brady was the right choice to continue to lead West Catholic Preparatory High School. As you all know, he is a proud West Catholic alumnus (Class of 2002) and prior to serving as Interim President he served as Vice President for Institutional Advancement.